Brogan’s Review: The Wayfinders: Why Ancient Wisdom Matters in the Modern World by Wade Davis

These last couple of weeks have been mad work-wise, so I haven’t had a chance to finish any of the reviews I’m working on. Luckily my sister Brogan has come to the rescue. Here then is her third review to appear on my blog... 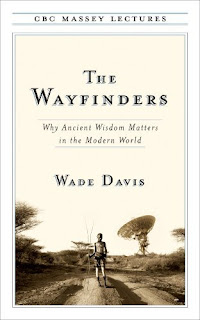 The Wayfinders: Why Ancient Wisdom Matters in the Modern World by Wade Davis is one of those slim books with an obscure title that you might think I would have found on the bottom shelf of a dusty second-hand bookstore, but in fact it’s quite a popular book—it’s even on a short waiting list at the library where I requested it. Part of the CBC Massey Lectures series, this book tells the stories of a variety of cultures around the world, of peoples who over centuries have adapted to and thrived in harsh, difficult environments with the tools that they could fashion from their immediate surroundings and only such possessions as they could carry. From the people who could sail the open Pacific ten centuries before the common era without the benefit of compasses or the written word, to the desert peoples who know to dig for tubers when there is no surface water anywhere for six months at a time, this book describes a range of human experience and skills that is inspiring and rich. These stories are honed in the context of our world where cultures are disappearing faster than endangered species.

The particular brilliance of this book is its detail. It gives shape, colour and texture to worlds as different as we could imagine, and it reflects on the first contact of colonizers and their vast misinterpretations of the cultures they encountered, from the Amazon to the Andes to Australia.

An environmentalist since my teenage years, I had a more nihilistic approach in those years, when I could relate to the notion that maybe all this planet really needed was for humans to disappear in order for the situation to improve. However, Davis indicates that humans have not always been destroyers of their environment—in fact this is limited to a few runaway cultures, including ours—and that it is the precious, historical/pre-historical knowledge of indigenous peoples who know how to interact with and live within the world that will save us, if anything does.

I wouldn’t qualify this book as an easy read. It doesn’t shy away from the ugly truths of our times, and after finishing it I didn’t entirely feel the buoyancy and hope that Davis manages to express. However, he does light the spark of celebrating human diversity, and the fact that it is fast eroding is no less reason to cherish and honour it. In Davis’s words:

Together the myriad of cultures makes up an intellectual and spiritual web of life that envelops the planet and is every bit as important to the well being of the planet as is the biological web of life that we know as the biosphere. You might think of this social web of life as an “ethnosphere,” a term perhaps best defined as the sum total of all thoughts and intuitions, myths and beliefs, ideas and inspirations brought into being by the human imagination since the dawn of consciousness. The ethnosphere is humanity’s greatest legacy. It is the product of our dreams, the embodiment of our hopes, the symbol of all we are and all that we, as a wildly inquisitive and astonishingly adaptive species, have created. (p. 2)

To read other reviews of this book, visit these blogs:
Books & Company • Lindy Reads and Reviews • recycled minds

or these sites:
Quill & Quire • The Globe and Mail • The Walrus

Posted by avisannschild at 10:43 PM

Other friends and faves